NASC Training Officer Henry Annafi showed he was a class act by responding to a school engagement request. 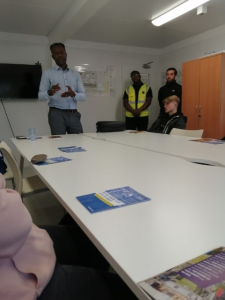 ISG Project Manager Ben Palmer and Site Manager Josh Alessiani was effusive in their praise. Ben said he had never heard laughter at one of their presentations before, while Josh stated that he hadn’t intended to stay for the entirety of the presentation but he was so engaged that he did so.

Rosie Parker-Robson, the lead teacher on the day, said: “We all thoroughly enjoyed listening to Henry’s talk about the scaffolding industry, learning more about the pathways open to our young people and potential earnings.

“Henry was able to connect with the pupils and kept them engaged for long period of time, which isn’t always easy.”

Henry added: “It was brilliant being able to capture the attention of this young audience who are too often accused of indifference and poor discipline, it just goes to show that if you give them respect and your attention, they are happy to return it.

“It proved to be a positive and worthwhile event for everyone involved and look forward to working with both ISH and A W Scaffolding again later in the year.”

What's in the job

Find out about becoming a Scaffolding Apprentice.